i'm not even going to comment on this and any of you who know how i feel about the subject are probably glad because you don't want to read a 20 page rant on the misconceptions that society has been heaping on us for years and years. oops! guess i did throw a teeny, tiny comment in there. but honestly? i'm so angered at this crap that i could spit botox needles! 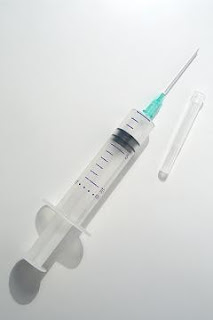 We all know that as parents, we have a huge influence on how our children view themselves and the world in which they live. Mothers in particular play a large part in shaping the way their daughters feel about themselves and their appearance. If a mom frets over her looks and worries aloud about her weight, hair, skin, etc., there's a good chance her daughter will learn do the same.

While most of us try to set a healthy example of self-love and acceptance, there are those who seem incapable of that. If a daughter learns from her mother to accept and appreciate herself the way she's made, what happens to the child of a mother who is obsessed with her appearance and will do anything to achieve her idea of perfection? In the case of Margaret King, she raises a daughter who won't be happy until she herself is perfect.

King is a 49-year-old housewife who has spent about $90,000 upgrading her face and body. She's had two breast enlargements, a nose job, a mini-face lift and a tummy tuck. In addition, she's had regular Botox injections for past eleven years. Given all that, it is no surprise that her daughter, 18-year-old Jodie, has learned to be critical of her own appearance.

When Jodie began to complain that her forehead was too wrinkly, her friends assured her that it wasn't. But her mother didn't even try to convince her that she was beautiful the way she was -- she gifted her with Botox injections for her 18th birthday.

Since then, Botox injections have become a regular mother/daughter affair; the two of them regularly get shot up with ever-increasing amounts of the stuff. "So what if I'm a teenage Botox addict? I can't think of anything worse than looking old," says Jodie. "I'll always find a way to pay for Botox. Now I've started I can't stop."

Despite the fact that many experts don't recommend Botox for anyone under thirty, there is no law prohibiting it. But at least one cosmetic surgeon thinks King is leading her daughter down a perilous path. "It sounds like this young lady is on a dangerous spiral. She's obviously getting encouragement from her mother who sounds like she might be addicted to Botox as well," says Alex Karidis.

"It is very very unusual to have Botox at that age and 18-year-olds should only have it if there is a real facial deformity, not just normal lines when they frown. There is a real psychological danger. This is setting a precedent for using anti-aging procedures for many years to come. The mother needs to be taking responsibility if she is encouraging her daughter to have injections into her face.

"Unfortunately, Karidis' prediction is already playing out. King has moved beyond enabling her daughter to have Botox; she has taken her for a breast enlargement consult and promised her a nose job for her 21st birthday.

Women getting plastic surgery is nothing new and ultimately nobody's business but their own. But I can't help but feel sad that this lovely young woman has been raised to believe that she needs medical intervention in order to feel good about herself. And anyone who believes that there is nothing worse than looking old desperately needs a reality check.
Posted by sami*stardust at 5:37 PM

the line is more than crossed when the need for perfection encompasses your entire life...people like this are in need of immediate psychiatric help...most unfortunate is the the model/image she has set for her young daughter...this is abuse...this is a mother who is not mentally capable of proviiding aa nurturing enviroment for her child...she does not truly know how to love...since she is shell of person herself...there should be interventions for people like this...ok i've said too much already...